The King of Fighters '98 UMFE/Shingo Yabuki 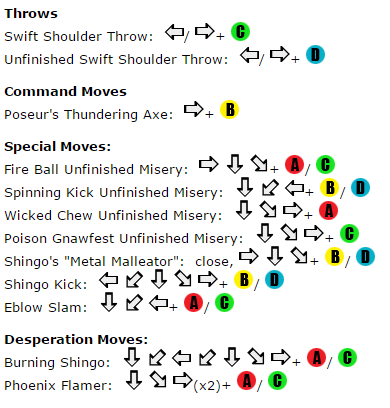 Shingo is a close-range pressure character with an interesting gimmick, in that his moves have a small chance of causing critical hits. In neutral, he has access to some okay pokes and a great forwards-traveling special. Up close is where Shingo shines, as he has access to the fastest cl.C in the game, with only 1 frame of startup, as well as low confirms, an overhead, and a proximity unblockable. Shingo struggles some on defense, as he doesn't have a invincible reversal to rely on. The random factor of the critical hits can also be a double-edged sword, as the critical hits can either increase or decrease his damage and combo ability, depending on when the critical hit comes.

All of Shingo's special moves have a chance to do a CRITICAL HIT!, doing more damage.

cl.C, f+B, qcb,hcf+AC
Requires 3 stocks, as it's not possible in MAX mode.

Take the unblockables in qcf+C and qcb+D when they come. While it could save your combo, it's a bad idea to rely on either for how unsafe they are.

Sometimes a CRITICAL HIT! will freeze the opponent before they get knocked away while Shingo is still in motion. This seems to happen randomly, but gives Shingo the opportunity to follow up with something, if a bit improvisation required at its randomness. (e.g. CRITICAL HIT! hcf+D, (opponent freezes) run, dp+p)

King of Fighters 98 UM FE: Shingo Guide by Mash It Out