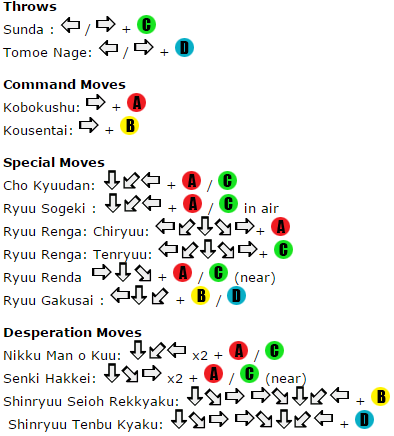 Kensou is a zoning and poking character that aims to control space and zone the opponent out or lock them down with his good long ranged pokes and fireballs. Once he has the opponent locked down and blocking, he can start pressuring them or mixing them up with a variety of tools. Kensou's big weakness is his floaty jumps that make mixups less scary, anti-airs easier for the opponent, and air escapes harder for Kensou. He also suffers from a lack of high damage on his combos.

cl.D, f+B, ABC, cl.D, qcf,hcb+K
Requires a short walk-up before the cl.D. Only works on standing opponents, and can be done midscreen if you exclude the jump-in.

King of Fighters 98 UM FE: Kensou Guide by Mash It Out