The King of Fighters '98 UMFE/Ryuji Yamazaki 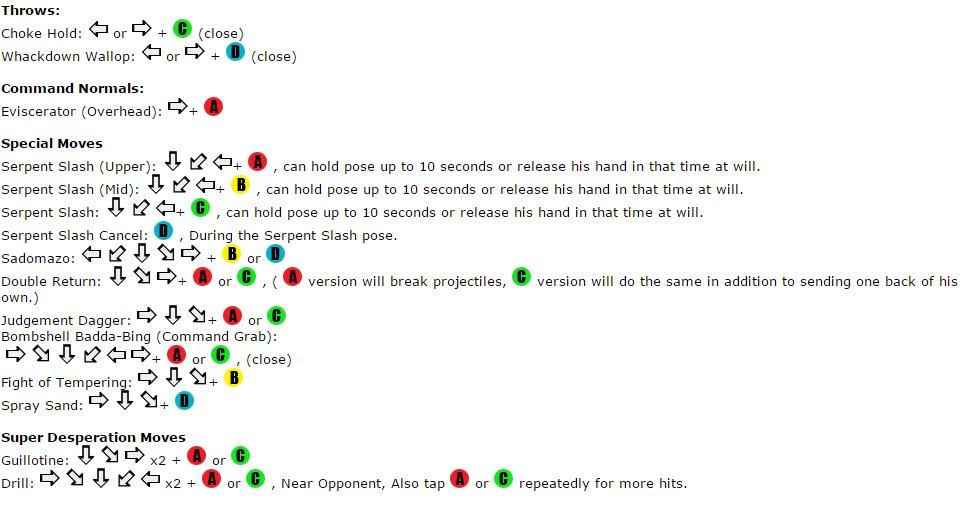 Yamazaki is a midrange poking character with a strong emphasis on neutral mindgames. Yamazaki's most defining feature is his long-range poking specials, which can cover space at different angles in front of Yamazaki. Combine this with some good poking normals, and Yamazaki's neutral space control becomes quite strong. Yamazaki wants to keep you guessing over which angles he wants to cover so that the opponent starts to hesitate in neutral. Yamazaki can then use this hesitation to go in, as his own close-range mixup game is quite strong, with access to both an overhead and a 1f command grab. He also has access to a projectile-absorbing move, so zoning him out can be difficult as well. Yamazaki's weaknesses lies in his somewhat weak combos and his lack of a meterless reversal, which makes dealing with pressure an issue for him.

(j.X), cl.C, dp+C/hcb,f+C/dp+B
His main meterless jump-in BnB. dp+C does the most damage, dp+B gives the best oki and hcb,f+C gives you a little of both.

cr.B, st.B, qcfx2+P/hcbx2+P
Metered combo from lows. qcfx2+P is easier to input and gives you corner carry and better oki, while hcbx2+P gives you more damage.

Yamazaki can cancel special cancellable normal moves to qcb + X (the snake arm). That special move can be held, and aborted at any time by pressing D. To instantly start a snake arm and immediately abort it, input qcb + B, then immediately D, similarly to priority linking in Street Fighter IV. This builds a little bit of meter, since you are whiffing a special move.

To perform an instant snake arm cancellation off of a normal move, do the normal move, then input qcb + CD as if you were just special cancelling it, and hold down C and D for several frames, until you see the cancellation occur.

Yamazaki also has a special move that is special cancellable in DP + D. An instant snake arm cancel after DP + D is very positive; so positive in fact that you can link a new DP + D.

King of Fighters 98 UM FE: Yamazaki Guide by Mash It Out