The King of Fighters '98 UMFE/EX Yuri 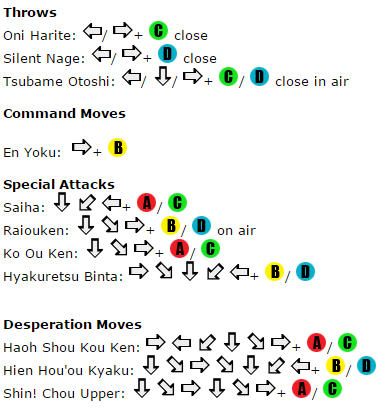 EX Yuri is a poking and zoning character. Her normals are strong for poking and air-to-airs, and she can control both the ground and the air well. She has both grounded and air projectiles as well, which makes her zoning game strong. She also has a great all-purpose move in her stationary projectile, which can function as an anti-air to catch people trying to jump her normal projectiles, as an anti-zoning projectile reflector if people try and counter-zone her, and as a combo tool from both lights and heavies. Her close-range offense is pretty decent as well, as she has access to both an overhead and a running command grab. Her weaknesses include a lack of a meterless reversal and fairly limited combo options.

cr.Bx2, cr.A/st.A, qcb+A
A very easy low confirm into a knockdown. You can switch out the qcb+A for a qcb+B/D on block, for a blockstring mixup.