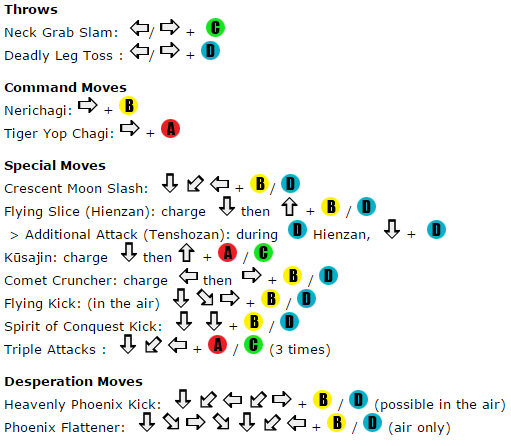 Kim is mainly a rushdown character. In neutral, Kim has access to some solid pokes to defend his space and a divekick to help him get in. He also has a flash kick that works as a nice anti-air and invincible reversal. Once Kim is in, he has access to a overhead, some nice lows, a good crossup, and his stomp cancel. The stomp cancel is a glitch that allows him to do strong pressure on block and highly damaging combos on hit. Kim is preferably played in Extra mode, because it makes his stomp cancel combos easier. Kim's main weakness is that he doesn't have any long-range tools.

Phoenix Flattener: qcb,db,f+B/D (can be performed in the air)

(j.X), cr.A, d,u+C
Useful combo for when you're too far away for cl.C to hit after your jump-in, but you need to charge down during your jump for d,u+C.

King of Fighters 98 UM FE: Kim Guide by Mash It Out