The King of Fighters '98 UMFE/EX King 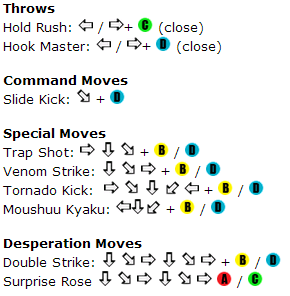 EX King is a zoning and neutral monster, thanks to her great set of normals that cover all the different areas she needs to control and her good projectiles that set up her zoning game. Without meter, EX King isn't as threatening, but when she has a bar she gets access to two really powerful DMs that boost her damage, let her zone even more effectively, and fill some holes in her gameplan. Her neutral is her strongest point, but she can also push the offensive when necessary; her main threat there is her proximity unblockable that launches for combo followups. Her weaknesses include a lack of defensive options without meter, and that her offensive threats are otherwise limited.

cr.Bx3, dp+K
Her longest light confirm. Has to be done point-blank, and the timing for the lights is tricky.

(j.X), cl.D, rdp+K, dp+K/hcb+D
Main jump-in and heavy button confirm. The dp+K ender does more damage, but requires a microwalk to connect, while the hcb+D ender is easier to land and offers better corner carry/oki.

(j.X), cl.D, rdp+K, cr.C, qcf+B
Version of the above that does less damage, but resets the opponent into a meaty projectile for better pressure.

King of Fighters 98 UM FE: EX King Guide by Mash It Out