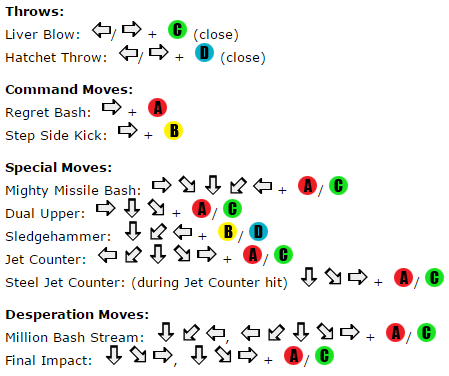 Yashiro is a big-buttons poking character with some excellent damage from his good confirms. Yashiro shines when he is in neutral and poking. He has multiple great poking normals, as well as a series of rekkas with different followups for combos that also have some poking and mixup use. Yashiro's close-range offense is a bit limited, but he does have access to an overhead and low confirms into DMs. On defense, Yashiro does have a DP, but it's pretty slow so it's hard to rely on. Yashiro is extra deadly when he has access to Extra mode meter, as that drives his combo damage up by a lot.

Final Impact: qcfx2+A/C (can be held)

(j.X), cl.D, f+A, hcb+C
Does the same damage as the first combo and grants slightly better oki, but you have one less hit to hit-confirm.

King of Fighters 98 UM FE: Yashiro Guide by Mash It Out