The King of Fighters '98 UMFE/Geese Howard 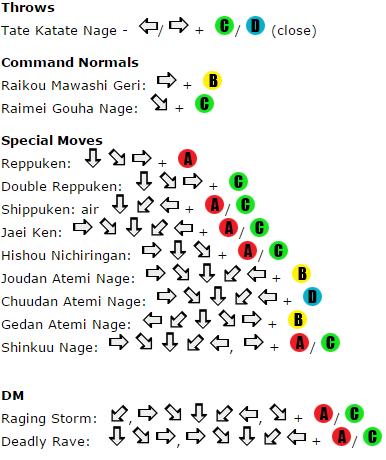 Geese is primarily a mid-range poking character. This is due to the fact that he has one of the best special moves in the game in his grounded projectile, which is huge and safe on block while also being kinda tricky to jump over. He also has a short-ranged air fireball that he can use to control a bit of the aerial space. Up close, Geese has access to a command grab that lets him mix up a bit, an invincible reversal and anti-air in his Raging Storm DM, and some counters that he can use to call out predictable offense or obvious jump-in attempts. His dominance of the close- and mid-range makes him a very effective character.

(j.B/j.C), cl.C, dp+C/hcb+A
dp+C does more damage and creates better oki, but it will whiff if the previous part pushed back too far (e.g. MAX mode, poor jump angle).

King of Fighters 98 UM FE: Geese Guide by Mash It Out