The King of Fighters '98 UMFE/Ralf Jones 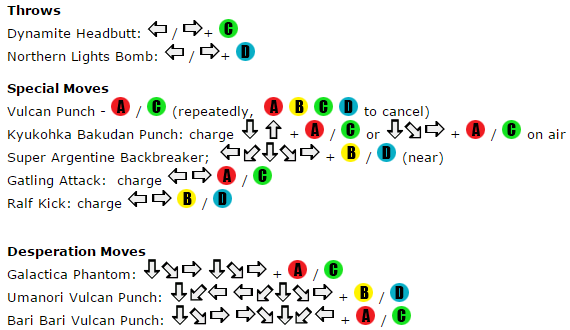 Ralf is a poking character that has access to some of the best normals in the game. Ralf has a number of excellent midrange pokes that allow him to control space in front of him very well, as well as some excellent jumping normals to control airspace with as well. Ralf's goal is to make the opponent to hesitate to move forward due to his pokes so he can go in and use his command grab. Ralf's combo game is fairly limited, but combo-ing into his command grab is good, as it gives him time to move in and apply pressure. Ralf's weaknesses include a lack of a meterless reversal, relatively limited mixups, and a lack of tools to fight at long range.

cr.B, hcf+K
Ralf's main low combo; cr.B is not cancelable but it is + enough on hit that you can link his 1f command grab afterwards. You can buffer the hcf+K motion and confirm if it hits or not.

(j.C/D), cl.C, b~f+C (corner)
Better meterless combo in the corner. Slightly more damage than hcf+K if all hits connect and keeps opponent cornered.
cl.C can be replaced by cr.Ax2. Deals exactly the same damage. Slightly harder but less commitment due to more time to hitconfirm and better on block.
Last hits can completely whiff if canceled too slow, leaving you open.

st.CD(COUNTERHIT), mash+A/C
Since st.CD is generally good to use in neutral, cancelling its recovery with mash+A/C(and cancelling that with ABCD) makes it even better. Sometimes randomly comboing off a counterhit is just a bonus.

b~f+K, (situational, see below)
Ralf kick leaves the opponent in a juggle state. Depending on how low/late/far/meaty and whether cornered or midscreen it hits you can combo into any normal, mash+A/C, d~u+C or qcb,hcf+K.

(j.C/D), cl.C, qcb,hcf+K, d~u+C
Ralf's main metered combo, gives you a lot of time to set up oki afterwards, or you can go into j.qcf+A for some extra damage. For 1 extra bar of meter you can do Ralf's Galactica Phantom setup, this will deal around 80-90% damage if successful. Due to characters having different wakeup speeds, you will need to time the Galactica Phantom slightly differently depending on who you're fighting.

King of Fighters 98 UM FE: Ralf Guide by Mash It Out