The King of Fighters '98 UMFE/EX Terry 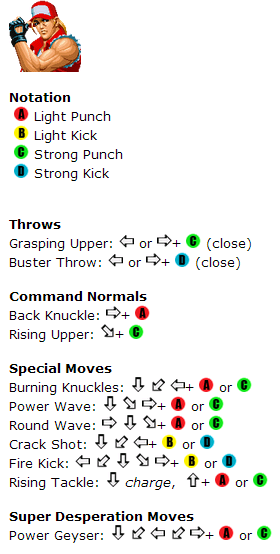 EX Terry is a character with tools for every distance, like a fireball for long distances and solid pokes for midrange, but close up is where he shines. He has great confirms from both lows and jump-ins, a mix of frametraps and true blockstrings, and great combo damage. One of his best aspects is that his go-to strings are good combos on hit and safe blockstrings/frametraps on block, letting him autopilot his way through. With Extra mode meter, he also gets access to some very damaging Quick MAX combos that make him a lot scarier. His weaknesses include fairly weak anti-airing options, and a lack of mixups outside of the general system tools.

King of Fighters 98 UM FE: EX Terry Guide by Mash It Out