The King of Fighters '98 UMFE/EX Billy 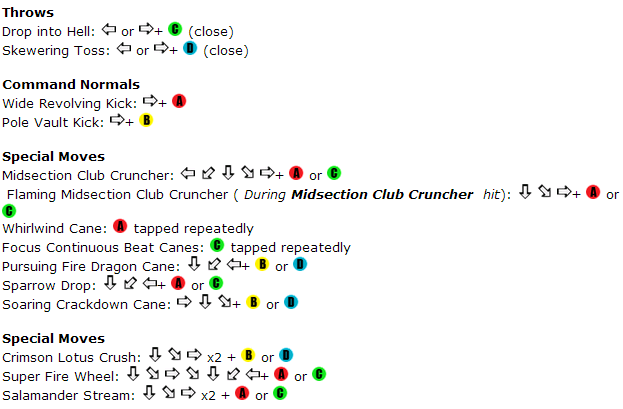 EX Billy is a midrange character that excels at zoning with his long-reaching normals and strong pokes. He has good anti airing options in qcf qcf + K, and his qcb + P. In addition to this, Billy can also rush down to push the opponent back into the corner, where his pressure is strong and he has access to good combo damage. Billy also has access to some decent mixups with his overhead and untechable throw, as well as an excellent cross up mid screen. Billy has a fairly unique weakness in that his quickest longest pokes have very bad priority, where the hurtbox extends further out than the hitbox, meaning he is uniquely vulnerable to counter pokes when using these moves. For Billy's pokes, you only get two out of three traits: Speed, range, and a hurtbox that's behind the hitbox. Compared to Billy, EX Billy has better combos that work from farther away, but lacks a DP (though he has his own kind of anti air special move, and a desperation move that's great for anti airing), and lacks the low recovery, quick start up counters of Billy.

With very good execution, he can make his pokes with the most priority, standing CD and crouching D, be neutral on block and much less vulnerable to rolling. Normally, these moves, while strong, are very negative on block and are susceptible to being rolled. This is done by cancelling to his mashed moves, then immediately stopping them.

Billy has two mash moves: (PPPP ending in A), and PPPP ending in C. You can press any punch button three times, but the fourth one determines which move you get.

Whirlwind Crane: PPPP ending in A
* Billy spins his staff around.
* Can be cancelled by pressing ABCD.
* Crushes projectiles. If you predict a projectile and you start this move in time, to immediately cancel it, you can get some nice frame advantage in neutral where blocking the projectile would normally make you negative. It takes time to mash out though, so has to be done somewhat predictively.
* If the opponent rolls in to it, you can let it rock for good damage.
* It's positive on block if you cancel it to avoid whiffing, if you can ever manage to make it touch the opponent
* If standing CD is cancelled to it, and it is immediately cancelled, then standing CD becomes neutral on block, where it's normally negative.

Focus Continuous Beat Canes: PPPP ending in C
* Billy rapidly and repeatedly thrusts his staff.
* Can be cancelled by pressing ABCD.
* Neutral on block. You can cancel cr.D to this, then cancel the move itself so you don't end up whiffing, to improve its frames on block.
* It's a poke with a good hitbox and hurtbox, but takes execution to be able to use fluently in neutral. It also only has quick start up if you can buffer its four punches in some thing like a jump, since otherwise you have to whiff a normal, which then cancels to this.
* You can let it do more hits to push your opponent away. If this move is out and the opponent rolls, you can let it rock to catch them.

(j.X), cl.C, f+A, ABC, qcfx2+C
Quick MAX combo where you link a DM after f+A. Best used in the corner since the pushback can make the DM whiff midscreen.

cr.C, dp+B, ABC, qcfx2+B
Quick MAX combo for SDM in the corner for a dp punish. qcfx2+K SDM does more damage than qcfhcb+P this way. For maximum damage quick max must be done while falling.