The King of Fighters '98 UMFE/Mr. Big 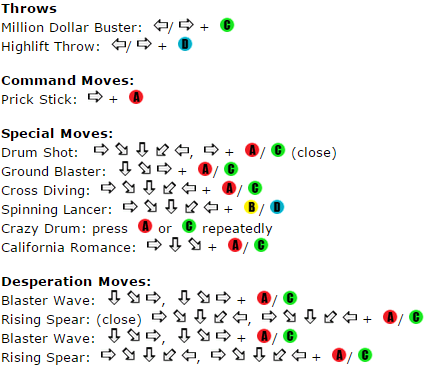 Mr. Big is both a poking and mixup character, with long reach that he can use to control neutral. He has multiple ways of reflecting projectiles, so he's not helpless against zoners despite his larger size and poke-heavy gameplay. He also has a good selection of mixup tools for when he feels like going in, with access to an overhead, good low confirms, and a 1f command grab. His main weakness is a lack of any kind of invincible reversal, and a minor one is that all of his longest pokes whiff on short crouchers, so he has more trouble against them.

f+A, ABC, cr.A, qcfx2+P
An Extra meter Quick MAX combo from his overhead. You need to be close enough that the cr.A will reach after the overhead for it to work.

King of Fighters 98 UM FE: Mr. Big Guide by Mash It Out