The King of Fighters '98 UMFE/EX Yamazaki 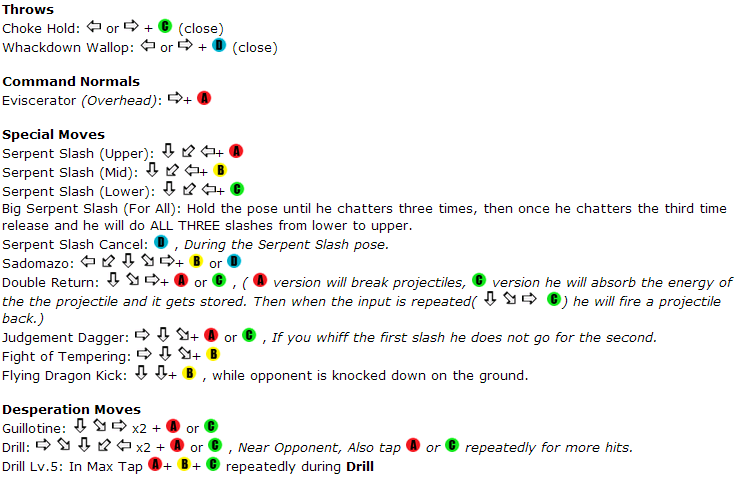 EX Yamazaki is a midrange poking character with a strong emphasis on neutral mindgames and pressure. EX Yamazaki's most defining feature is his long-ranged poke specials, which can cover space in different angles in front of him. Combine this with some good poking normals, and EX Yamazaki's neutral space control becomes quite strong. EX Yamazaki wants to keep you guessing over which move he will do, so that the opponent starts to hesitate in neutral. EX Yamazaki can then use this hesitation to go in, as his own close-range pressure game is quite strong due to his ability to cancel his poking specials' startup to create huge frame advantage for free. He can then make the most of this pressure with his overhead and 1f command grab DM. EX Yamazaki also gets some quite damaging combos, especially when you have a lot of meter to spend.

Flying Dragon Kick: d,d+B (while opponent is knocked down)

Drill Lv.5: ABC (during hcbx2+P, mashed as much as possible)

(j.X), cl.C, qcb+ABC > D, cl.C, dp+B, d,d+B
The qcb+ABC input will do the qcb+X and activate MAX mode at the same time: the D afterwards should be inputted immediately after the ABC to cancel the stance, then you need to microwalk up and hit cl.C. This becomes easier if you have an ABC macro and plink from ABC to D.