The King of Fighters '98 UMFE/Lucky Glauber

Voted "Most Improved" since '98 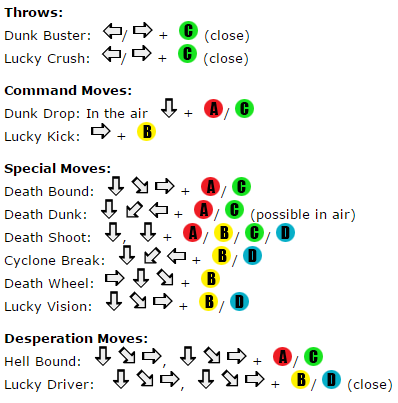 Lucky is a tricky zoner that specializes in runaway and poking strategies. Lucky's main weapons are his array of basketball projectiles that he can launch at various angles and distances to control space; he also has a fast teleport move that makes it tricky to catch him as he can always be moving about while poking or throwing projectiles at you. His pokes are big, and can be used to control space well when the opponent is too close for him to safely throw basketballs. Lucky also has some good options for fighting up close: his light strings are good, he has access to an overhead and a command grab super. He additionally has an invincible DP that helps him out on defense. His large size is a weakness, as he's more vulnerable to some pressure and mixups, and a lot of his pokes go too high to hit crouchers.

Death Dunk: qcb+A/C (can be performed in the air)

King of Fighters 98 UM FE: Lucky Guide by Mash It Out