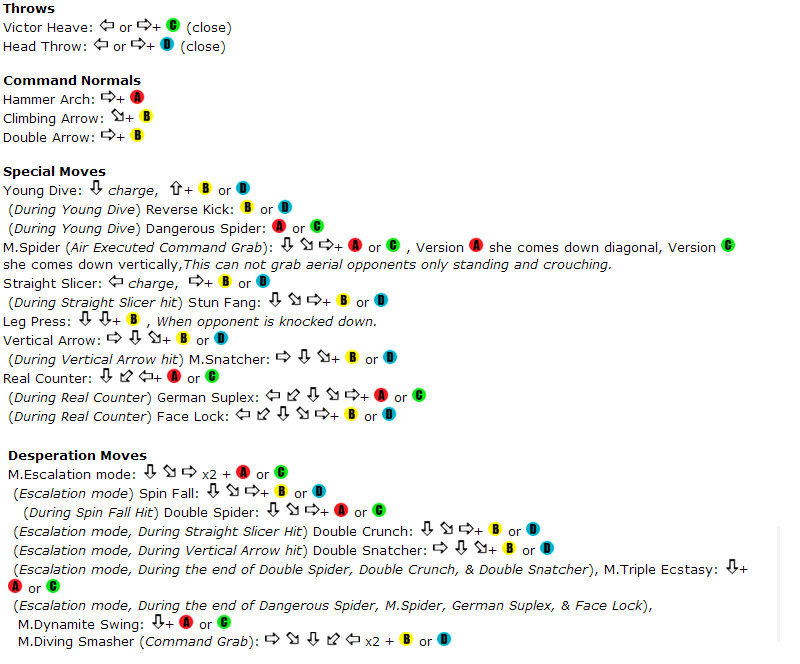 EX Blue Mary is primarily a rushdown- and mixup-based character that aims to score a knockdown and run mixups on the opponent. The main attraction of her moveset (especially as opposed to regular Blue Mary, who is otherwise extremely similar) is her install DM that perfectly complements this gameplan, as it increases the damage on all her mixup options. It also works as a utility tool, as you can use it defensively to react to the opponent's actions. To complement her main gameplan, she also sports a nice selection of normals that she can poke with to prevent the opponent from getting in on her. Her main weaknesses is a lack of long-ranged tools.

Leg Press: d,d+B (when opponent is knocked down)

j.B, ABC, cl.C, f+A, hcbx2+k
j.B can be done very high up and still combo, from about when Mary reaches the top of her hop arc

(Eng sub) How to use EX Mary-quick guide and tips by Vero The 98umer
King of Fighters 98 UM FE: EX Mary Guide by Mash It Out